Aside
↓ Jump to Comments

I Love Social Media, But It Makes Me Hyperventilate

I have been swimming in the social media space for a couple of months now, but there are times when I feel great anxiety about proper netiquette. Like, “hand me a brown paper bag” anxiety.  When it flares up alongside spelling and grammar worries, I might as well sit in a corner and rock until the feeling goes away.

But it never does.  It’s probably because I am, at heart, an introvert and people pleaser. I might as well get “LOVE ME!” tattooed on my forehead. At least then people know what they’re dealing with. My need to be loved, looks like this in the real world: 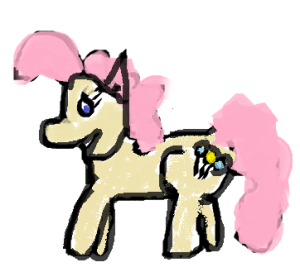 Pinkie Pie, as drawn by moi.

I wanted to use a picture of Benedict Cumberbatch photobombing U2, but I had a panic attack about what was legal to use. Then, I thought I’d use a photo of Pinkie Pie, who is a needy and energetic, and suitable to represent my people-pleasing angst. Once again… copyright. I do not want to tick off the Ponies. So, I decided to draw my own image of Pinkie Pie. I know. It’s awesome.

Twitter
Ah, yes. Twitter.  It’s 140 characters, chock full of wit & wisdom. I understand the basics; tweet a few times a day, don’t promote only your stuff, interact with your virtual friends, and don’t tell the world when you’re using Twitter in the bathroom. What I get stressed out about is…. When do I favorite? I usually favorite a tweet that I find amusing or when someone has tweeted me. But, what happens when I’ve had an interaction, but really don’t have more to say? Do I just favorite? Do I add a winky face or emoticon? Is the person on the other end of the tweet sitting there, waiting for my reply and thinking, “Is she still there? Why is she not continuing this conversation? Forget her. I’m taking my ball and going home.”

Other things I worry about…. When retweeting, if I want to add a response, but there aren’t enough characters, is it ok to delete parts of someone else’s tweet? It reminds me of college when I’d ask a friend to read one of my term papers to make sure it made sense and they would start shuffling my words around. Stick in an Oxford comma or tell me to tighten things up, but don’t squirrel with my words. It’s not cool. Does the same thing apply in the Twitterverse?

And, when is it OK to unfollow someone? I was following someone who I thought was humorous, and then their tweets turned into selling their own stuff and links to other random things. No real thought or interaction. For the longest time, I kept following them because I thought they followed me too, when I finally checked out their feed to see if they did tweet anything other than self-promotion, I saw they weren’t following me. I nipped that twit-lationship in the bud real fast.

Speaking of unfollowing, why is it that some people will follow you to get a followback, and then unfollowing you? In the words of Stephanie Tanner, “How rude!” Why is that a thing? I am probably putting more into Twitter than need be, but I follow people that I think I’ll find interesting, or at least will promote the heck out of me when I am my hilarious self. It just seems so cheap and dirty to do otherwise. All I can say is, “Do you kiss your mother with that mouth?”

Blogging
When I started blogging, I thought I would whip up brilliantly humourous blogs every other day, no problem. I had outlined several topics, set aside time to write, and had been inspired by other bloggers via Facebook and Twitter. I burned through a couple topics, and then it struck. Writer’s Block. My muse left and I could only muster up my Dorothy Parker-esque wit every few days (okay, I’m no Dorothy Parker, but, you know, maybe one day). Then, worry set in. Am I not REALLY a writer? My readers will leave me! And if I’m not writing, I’m not commenting!  And I look ungrateful! I am an uninspired, ungrateful hack!  Commence heavy breathing into a paper bag! In, out, in, out, in, out…. Getting light headed here….

PR Friendly
I read an article that compared labeling oneself as “pr friendly” to having a sign that reads, “Will work for cupcakes.”* Part of me thought, “Hey! I like cupcakes! I would work for those.” And then another part thought, “Am I tarting myself out for cupcakes just to be left with an empty wrapper when the company is done with me and my Twitter followers abandon me for being such a tart?” Other than obviously putting too much thought into cupcakes and tartery, I was faced with a moral dilemma. Would my blog/twitter feed/whatevs turn into me promoting stuff? Would I feel compelled to write things like, “Hanging with my hubs on our new #SealyPosturpedic mattress. I’m getting good sleep tonight!” The thought makes me want to vurp. Or maybe that’s the sushi I had for dinner.

*I can’t find that article anywhere. If anyone knows what I’m talking about and has the URL, let me know. Thanks, love you, mean it.

9 responses to “I Love Social Media, But It Makes Me Hyperventilate”