Coming Out of the Blogset

When I started blogging and tweeting earlier this year, only my husband and three dogs knew I was doing this. Frankly, I’m not sure how much they cared, as long as they got their belly rubs. But, recently, I’ve decided to come out of the blogging closet, or blogset, to use a fun portmanteau.

I am Dug, from Up. Squirrel! 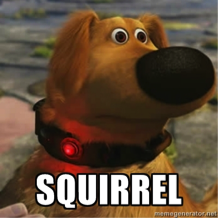 After gaining some traction with my blog and tweets (big hugs to all of you), I started to feel like I was leading some sort of double life. People asked me what I did over the weekend and I’d reply very quickly, “Nothing! Why do you ask? What did you hear? I spent all of time with my children. Coloring. And reading the bible.”

One night, I thought I’d tell two of my very best friends about my great secret. Of course, with the way I am with the word putting together, they probably thought I was going to tell them I was pregnant with baby #3, even though they know better.

I started off with, “So… I have some news.” And anyone who has friends, knows that in your 20s, this means someone is announcing an engagement, in your late 20s/early 30s you’re telling everyone you’re pregnant, and in your 40s, it means you’re telling everyone either that you’re getting a divorce or you’ve found a new wine you really like. Or both.

My blogging news was met with a much better reception than if I had announced I was pregnant, because once again, my friends know me way too well. And the next day, I had one following me on twitter and the other had read my blog in its entirety.

Have I mentioned that I heart my friends?

Every up has its down. Just like every rose has its thorn. Just like… sorry. Channeling my inner Bret Michaels there.

So, I was out for a work happy hour and I mentioned to a co-worker that I blogged. And then he asked about my blog. I felt like a doofus saying, “I blog about motherhood.” Somehow, it seemed like I could have easily said, “I Instagram photos of my dogs.”

In retrospect, I SHOULD have said, “I amusingly write about the ups and downs of motherhood.” Or something like that. Anything else would have been better.

It wasn’t until I wrote about my personal loss that I let anyone else know that I did this. Everyone was very kind, but I still feared some backlash. Not about the one particular post I shared, but… the other posts.

So… I may have referenced people I know in other blog posts. Not by name; I’m not stupid, but if they read it, they would know it was them. And… I may have to see one of those people on a semi-regular basis. Yeah. Awkward. I can only hope they are not big blog readers. Or, that I can distract them with something shiny if they get to that post.

All I can do is embrace my blogginess and ask everyone to love me, even if I might have tossed a little snark their way.

Who knows, I may even become more bold in what I write, because if I have already ticked off family and survived, does anything else matter? The only thing I probably won’t do is put my kids in my blog or on Twitter, but that’s mainly because I think their combination of brilliance and stunning good looks would just make other parents sad. Plus, this is all about me, obviously, so I’ll keep the attention where it is most important.

10 responses to “Coming Out of the Blogset”