You Want My Kids to Play With What?

I always keep my eyes open for new games or toys for the kids, and I have noticed a disturbing trend in what’s out there. Apparently, toy and game makers want my kids to play with poop.

Here’s a sample of what I found:

1. Have Barbie pick up her dog’s poop. You feed the dog biscuits and it poops out brown tic tacs. I can barely get the kids to feed the dogs let alone clean up after them. With my luck it wouldn’t make my kids scoop poop, it would lead them to believe poop is like a tic tac and they’d eat it.

Barbie, Taffy, and her turds. The dog’s. Not Barbie’s.

2. Laughing Japanese Poop. It’s poop that laughs and dances. Since when does poop have a face? And when does that appear? Is there a giant piece of poo smiling away in my body right now? It’s just creepy.

3. Doggie Doo. The point of the game is to feed the dog, listen to it fart and then after it poops, you clean it up. And apparently, what comes out is runny, stinky, putty. Yes! Let’s all play with poop. And then we can rub it all over the walls and revel in the poopiness of it all.

See the yellow poop? Not only is the dog pooping, but it’s also diseased.

4. Dogs and cats can get in on this too, because who says humans should have all the fun? For our furry little friends there are toys for them shaped like poop. My dogs already eat an obscene amount of poop; theirs, the cat’s, random poo outside. Do I really want to train them to think of poop as a toy? They’ll start chewing it on the couch and asking me to throw it for them. No thank you. 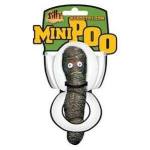 5. Poopsy pets, the one toy in the mix that purports to be an educational one. It comes with a girl and her pet unicorn. You shove poop into the unicorn’s gullet and then sparkly, twinkly turds pop out the back. Does the education come from teaching kids that unicorns are real, or that poop comes out as a rainbow? Because, I don’t find either to be particularly true. Unless it’s the dogs’ poop after they eat a box of crayons. That stuff is rainbow-riffic.

6. A squishy poop toy. Having a bad day? Angry at your boss? Squeeze the shit out of your stress, literally. Yes, nothing relaxes me more than having a giant turd in my hand. It’s why I love changing diapers and wiping my kids’ butts. Oh, wait. Poop makes me gag. I have no urge to squeeze it. Does anyone?

Relieve your stress with this playful poop.

7. Plushy poop and toilet paper. Yes, let’s give our poop a hug. It’s so naturally cuddly. I can’t believe I didn’t think of this before. Poop as plush. It just makes sense.

So sweet! Just like poop was meant to be!

Sadly, I found other varieties of poop. Honestly, what does it say about our society that people buy these things? Are we getting dumber every day? Or, am I giving too much of a shit about shit? It’s a question for the ages, really.

19 responses to “You Want My Kids to Play With What?”