Why My Dog Is Wearing a Dress

My dog is the most stylish in all of Ohio, and it’s the only reason she’s alive today.

This weekend, my daughter was supposed to be cleaning her room. I let the smallest canine in our home, Tiny, help her clean. That means, I used the dog as a carrot so she would actually clean her room as long as Tiny was there. 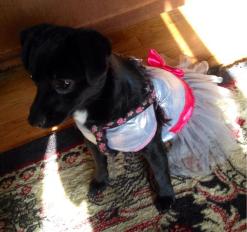 Tiny, in her rockstar dress

She emerged with a short time later with a very full backpack, and straining under the weight, she started to make her way downstairs. Realizing Tiny was not with her, I started toward her room to release the pup from her dungeon. She has a tendency to lock Tiny in whatever room she plans on returning to so she always has Tiny with her. It’s sweet, really. Well, mostly.

I have found Tiny placed high upon a shelf, with pillow and blanket. There was no way for her to jump down unless she wanted to break her leg. My daughter honestly thought Tiny would enjoy this bed she made with her, and she did actually seem content. She snuggled up on her pillow and fell asleep.

Another time, she was in the closet, locked in before my daughter headed off to school. I could only imagine what would happen if Tiny were locked in the closet all day. Ariel shoes would be chewed, pullups would be soiled, and dresses would be used for blankets. It would have caused tears and chaos for everyone involved.

Sometimes, I do wonder about the size of this pup’s brain. She puts up with so much. When I adopted Tiny, I was told that she was “the runt of the litter.” I didn’t think that meant anything more than she was a little smaller than her siblings. I also adopted Tiny’s sister, now named Twilight. In the year since I adopted the girls, they have grown and flourished. Twilight has also grown to be two times the size of Tiny.

Runt is not an exaggeration. Tiny is roughly the size of a chihuahua and Twilight is more like a rat terrier or small Labrador. When I look at Tiny’s skull, it doesn’t look like it could hold more than a walnut. But she also has the biggest heart. She is a sucker for belly rubs and snuggles. A pure soul if there ever was one.

Now, back to the past weekend. My daughter very eagerly stopped me before I could get to her room. Given the history with my daughter and putting Tiny in compromising positions, I immediately asked, “What is in the backpack?” I took it from her, and felt its great weight. Unzipping it,  Tiny’s head popped out, probably grateful for the fresh air. She was wearing a dress, one of my daughter’s Cinderella dresses.

This is another thing about my daughter. She LOVES dress up. She loves to dress herself, me, and anyone else who comes across her path. Obviously, it would include Tiny. While Tiny does make a smashing Cinderella, she does not fit well into one of my daughter’s dresses.

My daughter explained that she stuffed Tiny into her backpack so she couldn’t escape and shake off the dress. In order to protect my sweet little dog from being stuffed into another backpack, or any other bag, I very impulsively promised my daughter that we could buy Tiny a dress that was just her size.

That afternoon we headed off to PetSmart and found the perfect dress for her; a grey tulle number designed by Bret Michaels. Yes, that Bret Michaels. I don’t know how it happened either, but whatever. Tiny looks good. She rocks that dress all over the place. She’s probably just happy to be alive.

5 responses to “Why My Dog Is Wearing a Dress”