What Do You Mean, There is No Easter Bunny?

When I decided to propagate the myth of Santa, the Easter Bunny, and the rest of the pantheon of fictitious characters with my children, I knew there would come a day when the lies would have to end.

I just didn’t think it would happen so soon. 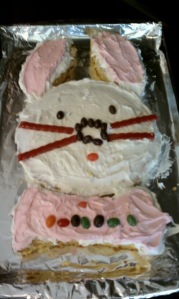 This guy, is totally real

It started a few weeks ago when my son asked at bed time if Santa was real. He wasn’t as concerned with how long it would take Santa to deliver the presents, or even the manufacturing of said presents. It was the cookies.

“How can Santa eat all of those cookies and drink the milk? He would be really fat and unhealthy.”

I had prepared answers for the presents. Thanks to the Doctor Who Christmas special, I could claim that Santa was really a Time Lord and that the sleigh was bigger on the inside, thus enabling him to carry all of those presents around the world.

I was not prepared for milk and cookies-related queries. Maybe a vacuum that would suck them up so he could eat them later? Elves that came with him and ate them? Or, maybe parents did help with the cookies part? I liked the last option because with that I could angle for some parent-friendly beverages and at least get a little wine out of the situation. I’m lactose intolerant and I really take one for the team when I down that mug of milk. I’m surprised my horrendous gas has not given my away yet.

No dice. Apparently his friend saw his parents wrapping presents that were from “Santa.”

I screw up a lot when it comes to my kids, but I have been on top of this whole stealthy ninja stuff. I steal teeth, move plushy elves, and stuff a mean stocking. I need other parents to keep up. Their slacking is ruining my efforts.

I did a little song and dance and managed to put off revealing any truth, but I knew my time was running out. Then, just one day before Easter, I overheard my son talking to one of his little friends who was over for a playdate.

His friend was saying, “Yeah, I saw my mom with some Easter-themed Skylanders under her rug, so I know there’s no Easter Bunny.”

My no-longer innocent child replied, “You know, there’s no Santa either. My other friend saw his parents wrapping his gifts.”

To pour salt on the wound, my daughter was in the room with them. I can’t have two kids lose their faith on the day before Easter!

Pouring myself a large glass of wine, I steeled myself for the inevitable. I was going to have to tell my son the truth, and try to save my daughter from finding out as well.

I also cursed the other parents again. Sweet son of a Triscuit, why couldn’t they be more like ninjas?!

Using my best, “We have to talk voice” I pulled him aside.

“So, I heard you talking about Santa and the Easter Bunny,” I started.

“Yeah, I don’t believe in them.” He flippantly replied.

Even though it could have backfired on me, I threw the only curveball I had.

“What about Jesus? You can’t see him, but you know he’s real.”

Knowing I was defeated, I threw in the towel and leveled with him. No, there was no Santa. Or Easter Bunny. Or Tooth Fairy. He looked excited to have been right, but there was a hint of sadness too.

The next morning, my young man played his part for his sister and enthusiastically opened his basket while declaring, “I love the Easter Bunny!” He tossed a not so subtle wink my way, but all things considered, my still-believing baby girl was none the wiser.

Honestly, I’m glad it went so well, but I can’t help but feel a little sad that this piece of his innocence has faded away. What’s next? Will he say that he won’t be going to Hogwarts? Or that he’ll never be a Pokemon trainer? I might need a hug and a stiff drink when that happens.