Stopping by Woods on a Muddy Afternoon

Whenever my husband says, “Go with me on this journey,” I usually gird my loins to prepare for one of his totally awesome plans.

This time the journey was to buy a plot of land in the woods, build a cabin on it and then rent it out most of the year so it will just pay for itself.

I was actually more on board with this than the last brilliant idea, which was to sell our house, buy some land and build our dream home. Great on the surface, but the truth is, we’d end up living in my parents’ basement for a year while The Hubs figured out how to build a house. From scratch. For the first time.

So you can see how a cabin in the woods would seem like a much better idea. At least I wouldn’t have to live in that mess while it’s being done. This girl does not do honey buckets, and requires electricity and water just to be content. Call me high maintenance, but I really like showers and power for my Keurig (okay that Keurig part sounds high maintenance).

Seeing that I didn’t say no right away, The Hubs seized the moment and whisked the whole family away one rainy morning to check out possible plots for our wooded kingdom.

The first one up for sale was adjacent to the downtown area of the region. It’s less of a downtown and more of a stoplight with a gas station. As we meandered through the side streets looking for the land, I noticed many double wides and could hear the dulcet tones of banjos in the background. This was not the wooded retreat I was seeking. It was the dark side of going out to the country. I have no interest in meth labs or squealing like a pig.

The road to the second piece of land was much more promising. There were trees, little log cabins, and instead of banjos, I heard cicadas. Now that’s more like it.

The woods are lovely, dark, and deep.

We followed the road, or dirt path covered in gravel, indicated by a prominently placed “For Sale” sign. It was lovely. Flanked by trees, the sun peeked through the leaves revealing a bucolic landscape. There was a stationary derrick, but as my husband pointed out, that would mean the property came with mineral rights and we might not have to pay for gas.

It was getting better and better. I like free gas. (Insert your own gratuitous flatulence joke here)

We came  to the end of the path, and decided to hike around the property to see what it offered. Other than a plethora of trees, there were creeks, clearings perfect for lazy deer to visit, and… 10-foot tall barrels with a metal ladder leading to them. I really don’t know what was being stored there, but it was the only thing wrong with the property.

High on the knowledge that we would be starting a new journey to get all Little House in the Big Woods, we piled into our minivan, ready to take a victory hike to the local caves.

We were ready to leave, but our van was not. In making a u-turn to head back down the gravel path, the little grocery-getter became stuck in the mud.

No one panics, because, hey, it’s just a little mishap. We tried pushing the car, rocking it back and forth, and putting sticks behind the wheels in a vain attempt to get just an inch of traction. The van would shift slightly, and then stop. 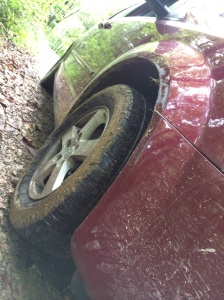 Nothing worked. Still, no panic. But, then I heard it.

Now, I panicked. My daughter had to pee. If it were my son, I wouldn’t have cared, because boys have the natural equipment to pee in the woods. We women, hearty as we may be, do not.

I could not ask her to squat and pee, because I knew that would mean she would pee all over her clothes. She’s 5, and as coordinated as I am. Then, there was a second complication. I had to pee too.

There was no way I would squat either. It was shark week and I did not need to be covered in my own blood as well as my own urine. I could just see my stench attracting every bear and wolf in a 10-mile radius.

Being ever-so-resourceful, I decided to use the ladder attached to the barrels, thinking we could sit on a step and use it like a toilet seat. Smart, right?

I placed a paper towel on the step and had my daughter sit down. Her pee went flying everywhere, but thankfully not on her pants. I helped her clean up and peed on our toilet step too. Since it was shark week, I left a special something behind on the paper towel. Of course, my daughter wanted to know all about that.

“Yes, I’m fine. When a woman’s body is ready to have a baby, and a baby doesn’t appear, then the body gets rid of the baby material.”

“Hey, Daddy! Guess what? This stuff is just because Mommy had me. It’s OK.”

Oh, Lord. Yes, please tell everyone and show them what I have going on in my lady land.

But it wasn’t enough. We were now faced with waiting for a truck to come find us in the wilderness and tow our sorry minivan out. Thank goodness my husband came up with an idea to gather up all the rocks we could find and use them as traction to drive out of hell.

Muddy, tired, and angry at nature, we were free! Oh, sweet freedom!

Later, we discovered that the land we were on was not actually the plot we wanted to buy. Apparently, the one we were looking at was across the street. It explains the gunfire we heard and ATV tracks we saw.

Yup. All that. For nothing. Well, not nothing. It made for a great story that we’ll remember for a very long time. I guess family bonding is not a terrible consolation prize. 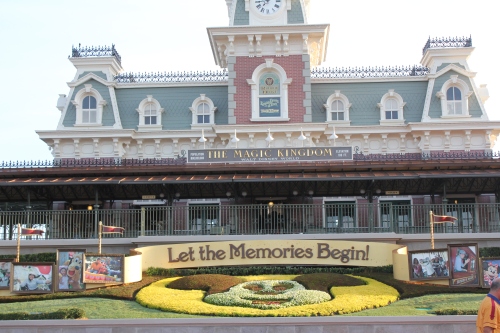 There are a lot of things I don’t miss about being a kid, and things I suffer through now just for the kids. Digimon, Seek & Find books, games where I have to pretend to be a plastic pony spring to mind. But, some stuff meant for kidlets… I actually enjoy.

Playing Barbies. Barbie has some serious swag. The impossible shoes, fashion forward outfits, multiple careers. I don’t want to be Barbie; some of her incarnations are tramp-tastic; I just want the stuff. Her dream house is my dream house. That closet that goes on for miles, an Olympic-sized pool, a horse to ride at any time. It’s Kardashian-esque, but not nearly as x-rated.

Fairies. I hated the portrayal of Tinker Bell in Peter Pan. The short skirt and bitchy attitude just made me mad. So, when the first fairy movie came out, I was less than thrilled. Her leaves left little to the imagination. Why were the other fairies covered up and not her? Is it impossible to add an extra layer of ivy? Of course, my daughter watched it and loved it. Then I watched it and loved it. Tink is an engineer! There is friendship and of that warm and fuzzy crap! Eventually she did get some more leaves, thank goodness. I don’t like my smart, engineer fairies too skanky.

Magic shell. Turns any bowl of ice cream into a Klondike bar. Throw in some caramel, and it’s orgasmic.

Disney World. The princesses! The rides! The sheer magic of it all. Watching my kids having fun, means I have fun too. Plus, did you know that there are many pools where you can sit on the sidelines and drink margaritas? Seriously. The pool is fenced in, the water is shallow and a bar is nearby. That mouse is super fantastic and awesome.

Forts. Take sheets, pillows, chairs and an engineer of a husband, and you get paradise. I don’t fit in them very well since I am not three apples high anymore, but there is something so magical about creating your own little world. The kids love to watch movies and eat popcorn in their fort. For me, it’s a perfect place to hide. Take a glass of wine, go into the fort, and no one knows I am there. There is no screaming or crying in my fort; just blessed silence.

Dilly dallying. When I finally let go, which isn’t very often, I love looking at the world around me. Rabbits, leaves, all that outdoorsy shit. The kids do too. A hike that would take most people a half hour takes us at least twice that, because we’re making dirt mounds, examining fallen trees, and play guessing games with the clouds. I bond with the kids, and I don’t have to put much effort into hiking. It’s a win all over, really.

Giggle & snuggle fests. The kids crawl into my bed on a Sunday morning, and we cuddle up, laugh, and act unbelievably lazy before finally getting up for the day. It’s special and magical and I love it. I also love not having to get out of bed for an extended period of time on the weekends. If only I could convince my husband to get me coffee and a bowl of cereal, it would be perfect.

It’s cathartic to share my secret with all of you. Don’t you dare tell anyone, or else I won’t give you a bowl of ice cream with magic shell. It’s perfect when it’s paired with pinot grigio in a tent.